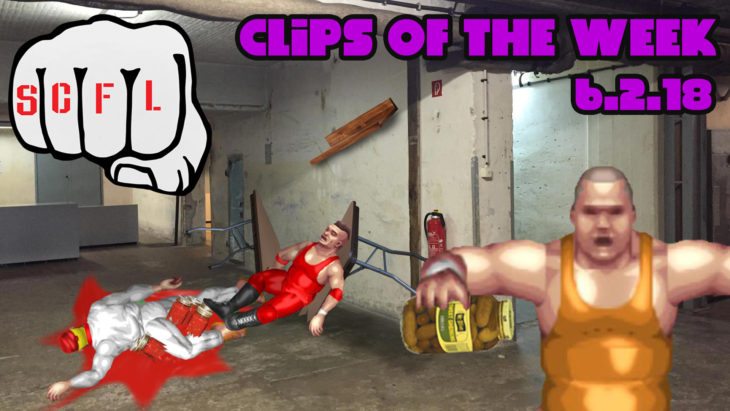 Last Saturday night, SCFL Pro presented Discussion vs. The World, This Fire Still Burns on twitch.tv/scflpro. There were twelve big fights on hand, so let’s take a look at some of the best moments from last week.

In the opening contest, Ron Harris pinned Mike Miller to capture the Opening Scramble title in an absolute shocker. Credit Lewis took on Karate Hendrix in the next contest, with Lewis winning by ankle lock submission. In a bloody Hardcore Tag match, Gary Bollea and Turgid Delmonico met October Schmidt and Hans Schmidt (No relation). In another shocking upset, Hans Schmidt nailed Delmonico with a spinning backfist for the victory.

The DSA’s Aladdin Bell continues to try and get a singles match against his Alt Right father, Federal Bell, but Federal sent his tag partner, Piotr Petrov to take on Aladdin instead. After a big side slam, Petrov put away Aladdin. In the next contest, things got weird. Puncho Baggins and Ricky Robinson teamed up on behalf of Raoul Hernandez to take on Spencer Morgan and Technology Cooper. Hernandez interjected himself into the match to attack Cooper, but either due to intense stomach pain, a lost contact lens, or simply being a weirdo, Raoul bent over and remained in that position for several minutes.

In another Hardcore Tag match, Blowhole Bernard and Justice Turner took on the uncle and nephew combo of Brick Roberts and Eosinophil Rossi. Bernard obliterated Rossi with a Northern Light’s Bomb onto a barbed wire-wrapped baseball bat. It was extremely grody. Giovanni Dinner was scheduled to face Weather Walker, but due to The Gherkin Incident, involving Let Liu and Dougie Middle of The Fixers, he was rendered incapacitated. Mama Dinner instead took his place, and Sledding Bianchi attempted to save her from a brutal beating.

In the Trios Title match between the champs, the Sons of Anger, Ratt Middle, Gorvis Rogers, and Rastaban Baptiste, took on Tapas Tiempo, Gordon Kuntz, and Kurt King. Middle ended up pinning Tiempo, but there was a very strange moment when King threw Rogers out of the ring, and the two men recreated a terrible vaudeville routine, with both swapping inside and outside the ring positions. One of the best matches of the night was between Philly Supreme and Magomed Ashmonov. Magomed survived a bizarre run-in from Raoul Hernandez and getting cut open early in the contest, but in the end, simply couldn’t take a pair of Philly’s big uppercuts.

Raoul’s antics continued, as he decided to attack Freddy Fischer during a Dot TV title match against current champ, Wim Nijman. Nijman knocked out Fischer with a huge backdrop driver, garnering another successful title defense, albeit with an asterisk. The match ended with another big injury, as Discussion Davis defended his World Title in the Open Challenge against the frail and elderly Sledding Bianchi. Discussion ended up putting Bianchi away in under nine minutes.

Please join us this Saturday night at 11PM ET on twitch.tv/scflpro for another great night of fights, and don’t forget to submit your own clips during the broadcast