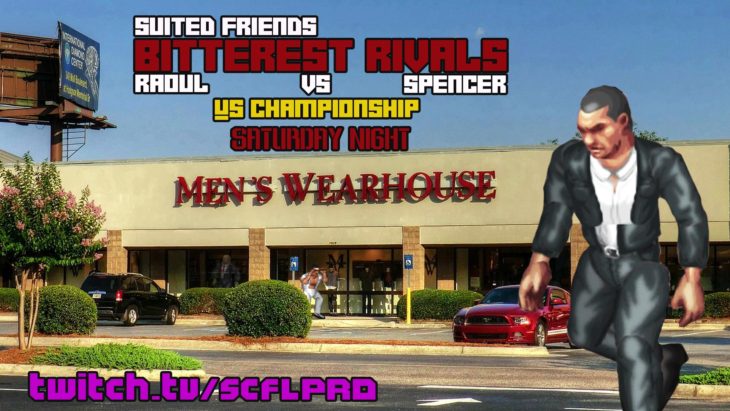 In the first contest of the night, Ron Harris will defend his championship frying pan in the Opening Scramble match against seven other men. Can the most unlikely winner become one of the few men to defend the skillet, or will he get unceremoniously eliminated in the first five minutes?

Next up, Wigwamm Watanabe is still on the hunt for a MMA win, this time against the always dangerous Choochai TrainMuayThaiGym. Wigwamm fought to several time limit draws recently, but Choochai is more than capable of scoring a quick knockout, so he’ll have to be on his toes.

Back in March Sadness, Credit Lewis defeated Mike Miller by submission via leglock. The hold was applied a little too brutally, and Miller got injured and had to sit out for a few weeks. Now, Miller has returned and has really honed his submission skills, picking up several eliminations at the Backyard Barbecue Brawl and last week’s Opening Scramble match. Now, Miller has challenged Lewis to a Submission Match to determine grappling supremacy in SCFL.

The Hardcore division is one of the brightest jewels in SCFL’s crown. Granted, it is a blood red ruby, but it’s still very pretty. Fragrant Tanaka and Meete Mein will look to add to that blood with a match that has violence written all over it.

Tapas Tiempo lost in his Trios Title bid last week, as he got pinned by Ratt Middle. This Saturday, Tiempo is looking to shore up his own squad as he has challenged his own partners, Kurt King and Gordon Kuntz to a Triple Threat match.

Front Reed has burst onto the Hardcore scene, spilling buckets of blood en route to grabbing everyone’s attention. He could easily challenge for the singles title, or, with Gordon Garabaldi, the Hardcore Tag belts. However, he’s simply looking to remain active this week, as Front Reed takes on Earl Vontrell in exploding ring Hardcore action.

Gyro Supreme has returned to a caregiver role for his nephew, Cheesest Supreme, following the Shadow Realm abduction of Cheesest’s best friend, Sanders Suzuki. Now, the Supreme Team is taking on High Seas squad of Algorithm Schneider and Captain White. Can Gyro drag his other nephew to a title shot? They’ll have to win this match first to get that ball rolling.

Last week, Weather Walker was prepared to take on Giovanni Dinner once again. However, an unfortunate gherkin incident involving Giovanni and The Fixers, Let Liu and Dougie Middle, rendered Dinner unable to compete. Even more unfortunately, Mama Dinner had already made her way to the ring to await her son, and Weather Walker pounced on the opportunity to get some frustrations out on the woman that’s been the cause of several of his losses. Now, with Mama in the hospital, Giovanni and Walker will square off in a Falls Count Anywhere match.

The final third of the scheduled card is a cavalcade of title matches. Wim Nijman will defend his Dot TV title against Magomed Ashmonov. Magomed has been very active in these past few weeks, and he keeps impressing every time out. Nijman ran into some incidents with his last two Dot TV title defenses, with one ending in a Shadow Realm-induced No Contest, and the other being marred by a run-in that saw Nijman knock out Freddy Fischer. Either man is more than capable of putting the other man away inside of 15 minutes, but it’s more likely that they’ll just be getting warmed up at that point.

It didn’t take long for Justice Turner and Blowhole Bernard to get back up to speed, following Turner’s reemergence from the Shadow Realm a few weeks ago. Now, these two big bruisers are challenging for the Hardcore Tag titles, currently held by the incredibly durable Kelly Kelley and his enormously large son, Mickey Kelley. Blowhole and Justice are looking to become two time champs, while the Kelleys look to add their third successful title defense to the record books.

In the co-main event, Raoul Hernandez is taking on his former Team SUITS partner, Spencer Morgan, for Morgan’s Uncle Sledding ceramic mug. Raoul has been waging a campaign of psychological warfare against Spencer, which has resulted in Morgan getting submitted by Raoul’s team mate, Ricky Robinson on two occasions. Now, though, it’s just Spencer and Raoul, one on one in what should be an outstanding match.

In the main event, two weeks removed from his grueling performance at the Backyard Barbecue Brawl, and one week since he injured Sledding Bianchi, World Champion Discussion Davis is still issuing his Open Challenge.

Please tune in to twitch.tv/scflpro starting at 11PM ET this Saturday night for an incredible night of pro wrestling action as only SCFL Pro can bring you!