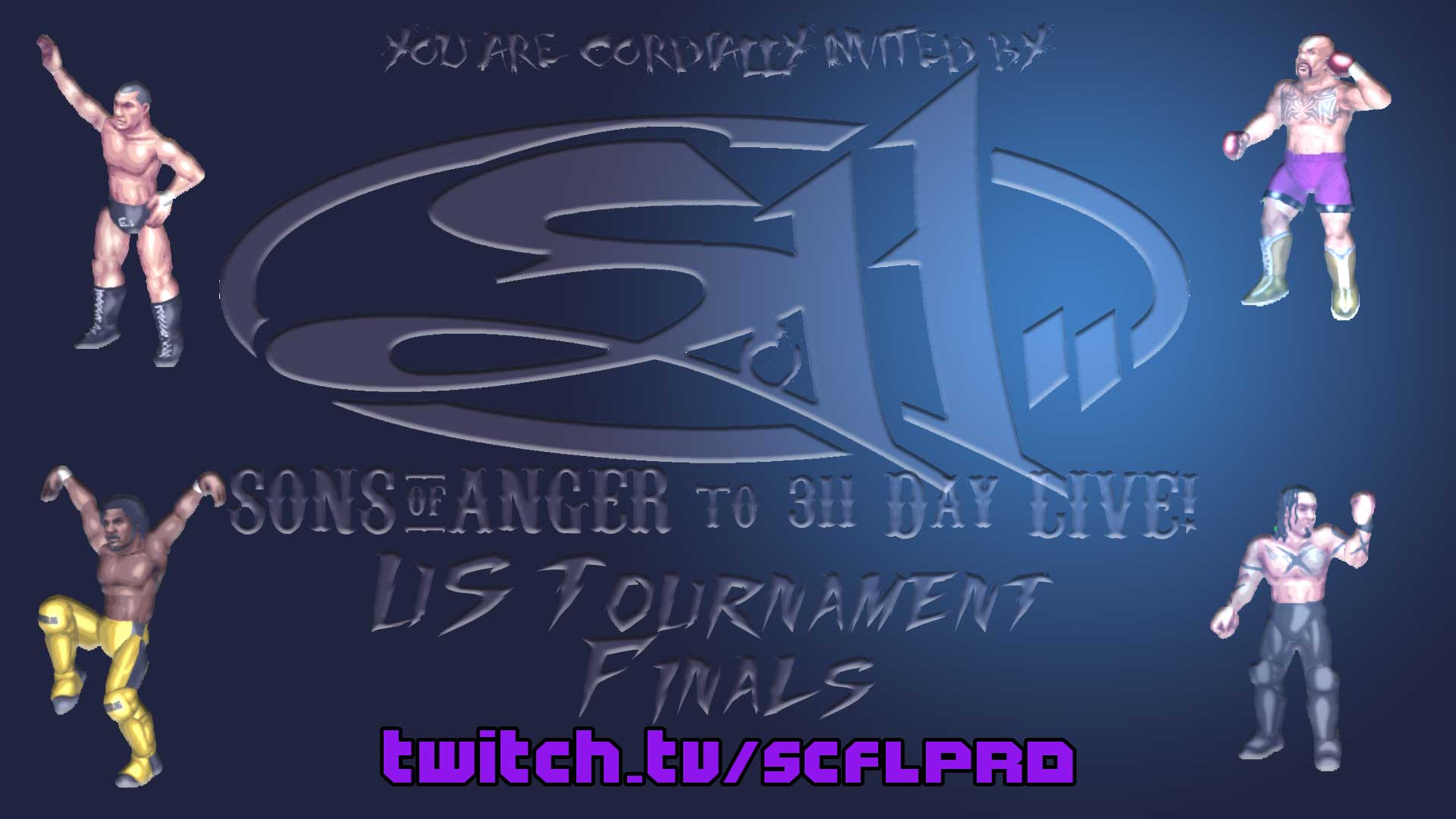 Greetings, fellow travelers. It’s been a long, wild week in this crazy, mixed-up world, but there is good news. Superchat Pro Wrestling is back to welcome you into its large, structurally abstract-as-a-concept arms with a new show. Saturday night, at 11:30 PM MT, live at twitch.tv/scflpro , it’s going to be a celebration. For you see, as the event progresses, Saturday will become Sunday, and this Sunday is the most important day of the year for one group. Sunday is March 11, known to the Sons of Anger as 311 Day. The new Trios champions will be celebrating the third greatest band from Omaha, Nebraska, but don’t let that deter you from watching.

As always, the show will kick off with a Scramble match. New champ Lil Jonesy looks to defend against many tough men. However, Opener Scramble mainstay Eosinophil Rossi is not scheduled for the first match of the card, as he’s been put into tag team action with his alleged uncle, Brick Roberts, as they take on the always game pairing of young Miles Manhoef and the far more experienced Jacques Jean-Jacques.

We will be seeing some new blood, as Giovanni Dinner is set to debut against the Violent Vegan, Garden Greene. Let’s all just hope that Dinner is better at finding the Beliribbun Civic Auditorium and Puddle of Mudd memorial museum.

Gary Bollea is putting his Shoot Fight belt on the line against the extremely heavy-handed Foundation Russo, and I don’t mean his prose lacks subtlety. Though neither man really goes in for nuance inside the ring, or caged dodecagon, as the case may be.

It wouldn’t be a Superchat Pro card without senseless violence, and that quota will be filled by way of a Landmine Deathmatch between Puncho Baggins and Offers Thompson. Offers is one of the better Dot TV champions in Superchat history, while Puncho has never met with any kind of major success, but maybe this is just the opportunity he needs to jump-start a fruitful hardcore career.

Speaking of the Dot TV title, Freddy Fischer will be defending against Torvald Harrellssen. Fischer has made history, being the first man to defend the title via submission, when he made Puncho Baggins tap to a banana split a few weeks ago. Fischer has since fallen back on the Dot TV standby of forcing a time limit draw. Harrellssen hasn’t been seen a lot recently, but he’s back in singles competition, looking to use the powers of socialism to achieve victory.

The Hardcore Tag team title is on the line next, as two-time champs, Maximo and Maniac Missouri will defend their beloved framed picture of The Public Enemy against a team with decidedly less hardcore roots. Tapas Tiempo and Fortran COBOL will look to unseat the violent Missouris in a cage match. There’s no word yet if it’s escape rules or pinfall only, and I’m sure nobody will really be certain until referee Sledding Bianchi decides how he’s going to call it.

The finals of the US title tournament are up next. Four tournament winners, Spencer Morgan, Karate Hendrix, Nightsbane KVLT, and Chuckie Murphy will face off in one last tournament to determine the inaugural winner of the US belt. All four men have put in some incredible performances already, and these three matches should all be spectacular.

The main event of the evening is going to be an interesting affair. Ratt Middle, Gorvis Rogers, and Rastaban Baptiste, fresh off winning the vacated Trios titles, will defend those belts on 311 Day. They are facing a severely overmatched group in The Fixers, Let Liu, Xylophonist Bianchi, and after his performance last week, Dougie Middle. Ratt will be facing his younger brother, who only came to Superchat in an effort to convince the elder Rathaniel to return home, but Ratt has completely ignored his younger brother. Will Ratt hold back out of familial love, will his bullying instincts kick to beat up on poor Dougie, or will Dougie, who went over 30 minutes with Discussion Davis, find a way to fight back?

There’s only one way to find out, and that’s by watching Superchat Pro, live at twitch.tv/scflpro starting at 1:30AM ET, Sunday morning!