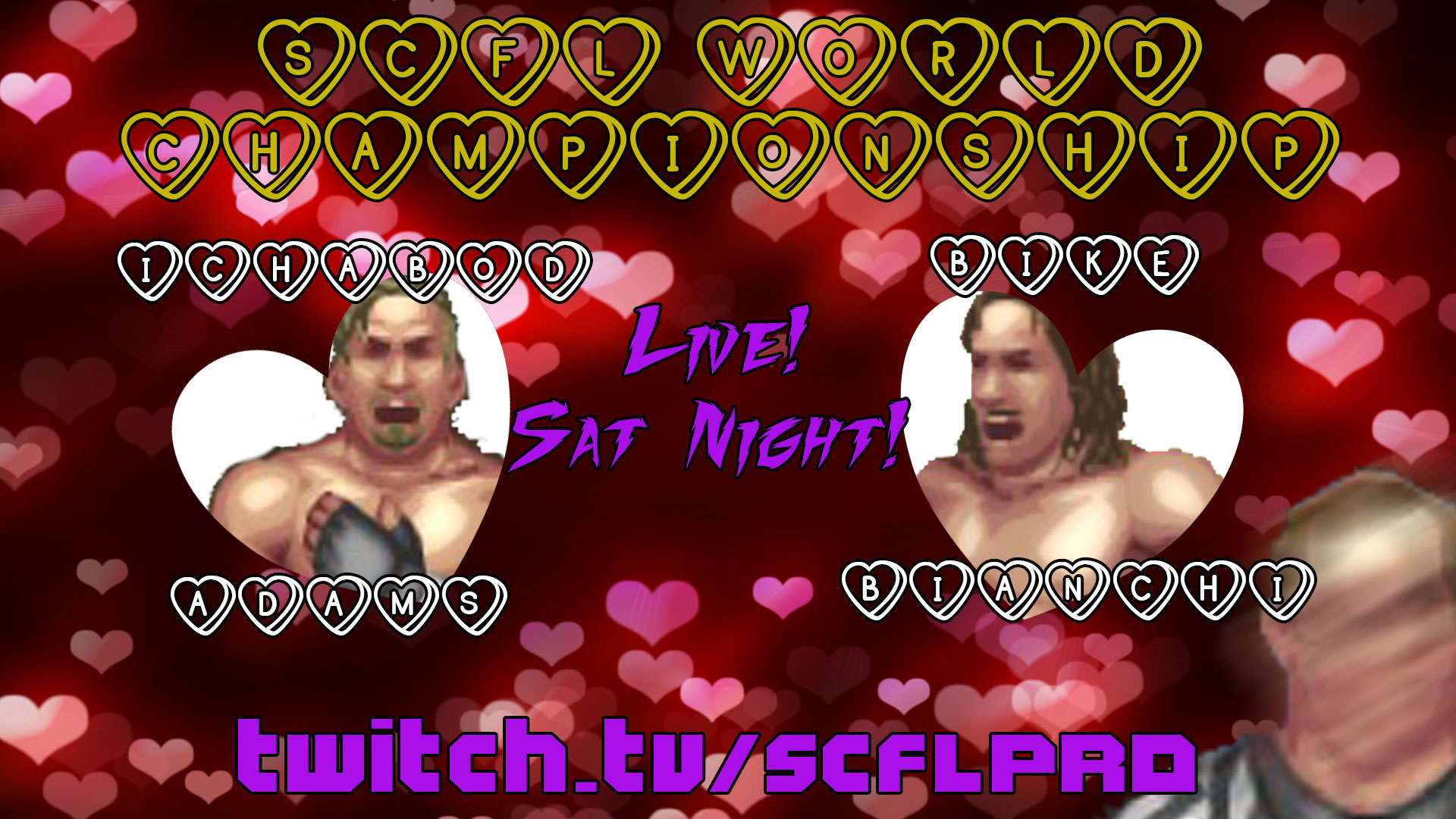 Ladies and gentlemen, the following has never been said before, but do whatever it takes to get to Iowa this weekend. Book a flight, drive, hell, commandeer an air boat, even if that’s not exactly feasible transportation. This Saturday night, live from the Beliribbun Civic Auditorium, Agricultural Exhibition Hall and Municipal Snowplow Garage, SuperChat Pro Wrestling presents Valentine’s Slay. If you’re unable to get to Iowa, head over to twitch.tv/scflpro which is the next best thing. Literally every title is going to be on the line in an epic night of fights.

The Scramble frying pan, notable for being as slippery to hold on to as the eggs sliding around in the teflon-coated skillet will be defended by the nipple-less Front Reed.

Next up is tag team action, as Team DSA is trading in their roses for thorns as they take on Team SUITS, who are looking for revenge. America Wright of the DSA snapped Raoul Hernandez of the SUITSquad’s arm several weeks ago, and he’s finally recovered enough to get back in the ring.

Kelly Kelly, who has trouble staying upright in normal circumstances, will be facing the man that’s caused enormous, traumatic brain damage to him, Bradford Culpepper, in a Last Man Standing match. Hopefully this will end this sad farce as Kelly continues to challenge and lose badly to the school lunchroom assistant.

Gruesome champ Wigwamm Watanabe will be unifying that MMA-esque belt against Choochai TrainMuayThaiGym and his kickboxing style S-1 belt. Rumor has it that the resulting championship will simply be known as the Shoot Title.

Next up is more tag action, as the LOST Boys will put their framed 8×10 glossy picture of The Public Enemy (rest in peace Rocco Rock and Johnny Grunge), which represents the Hardcore Tag Team titles, against High Seas. These four men have bled and broken their bodies against each other numerous times, so let’s see who comes out of this contest in fewer than pieces of eight.

The most prestigious belt, the Dot TV title is on the line, as Charles DuBois defends against former champ, suspected arsonist, and successful member of a steel drum band, Nightsbane KVLT.

There’s yet more tag team action, but this time it’s of the six man variety as the Trios title is on the line. The Supreme Buick family, comprised of Gyro Supreme, CHEESEST, and Sanders Suzuki will take on the Sons of Anger, Ratt Middle, Gorvis Rogers, and Rastaban Baptiste. These six men met several weeks ago in perhaps the greatest match in SuperChat history, and since then, they’ve met in various singles and standard tag team combinations, with the Supreme Family taking the bulk of the victories.

In one of the most high profile non-title matches, former tag partners, Philly Supreme and Discussion Davis, face off. They never clicked as the super team, Philly Davis, and both men blame each other for their string of disappointing and embarrassing losses.

The co-main event is one final tag team match, as the standard Tag Team champs, Piotr Petrov and Federal Bell, part of the Alt-Right connection, take on the most unlikely challengers, Let Liu and Xylophonist Bianchi, also known as The Fixers.

The main event is a World title match, contested inside the unforgiving, brutal confines of a steel cage. Ichabod Adams, leader of the Alt-Right, and reigning champion will face Bike Bianchi with a SPECIAL SECRET REFEREE!

Tune in to twitch.tv/scflpro at 1:30 AM ET, Sunday morning for Valentine’s Slay, the first mega-event of the New Year.