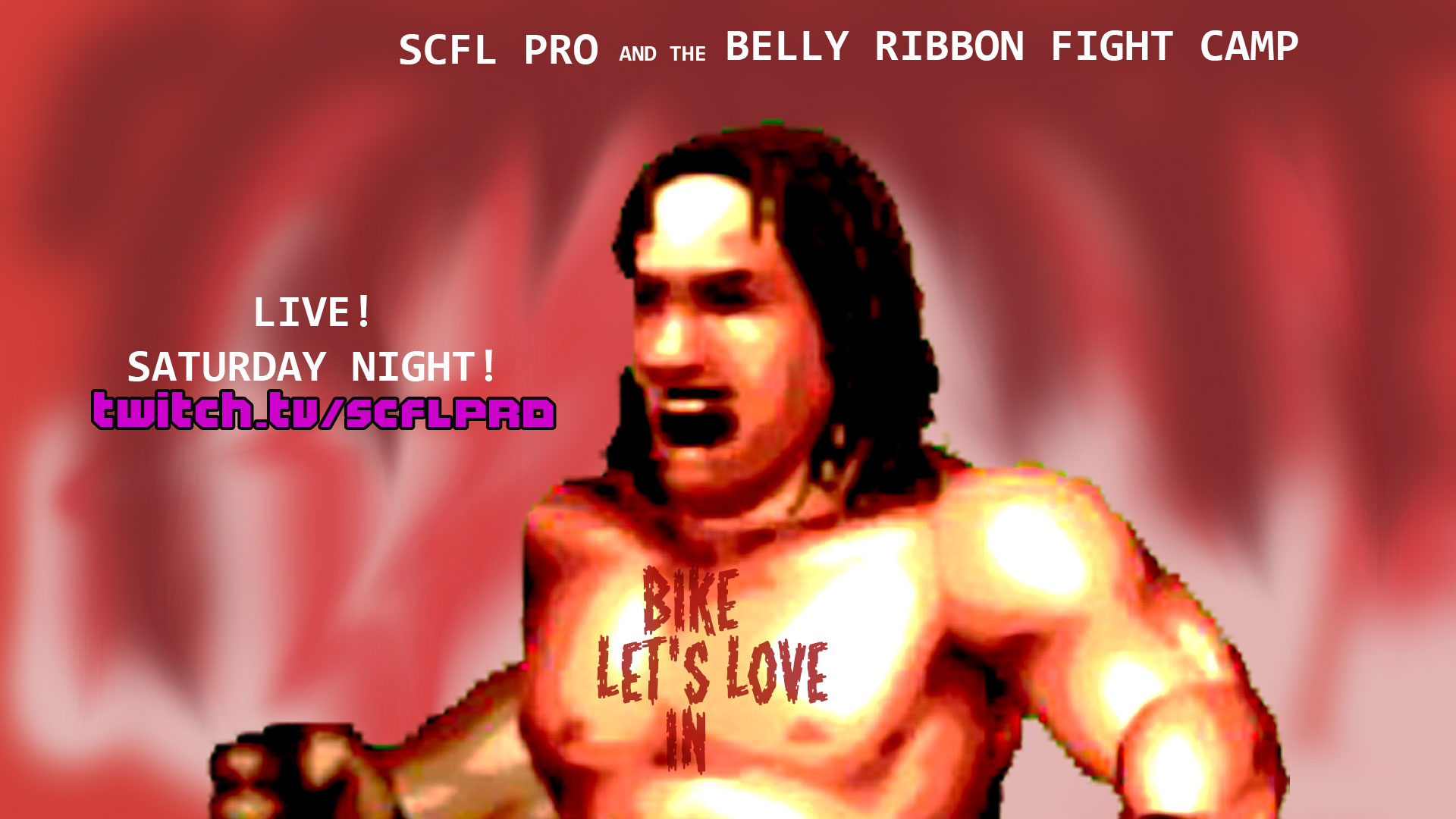 Breakups are always hard, and no breakup has hit Superchat Pro harder than the dissolution of fan favorite tag team, Philly Davis. After an escalating series of humiliating defeats, the two former kickboxing world champions, Philly Supreme and Discussion Davis have called it splitsville, and are now back in the arms of the own friends and family, Supreme Buick and Belly Ribbon Fight Camp, respectively.

The breakup wasn’t exactly amicable, as Philly will be teaming with his uncle, Gyro Supreme to take on Davis and Garden Greene in high stakes tag team action this Saturday night, only on twitch.tv/scflpro starting at 10:30 PM PT/1:30 AM ET.

With just one week out from a big, Valentine’s Day themed event, Superchat Pro is ratcheting up the intensity. Things are kicking off with a defense of the Scramble Frying Pan, as current and two-time champ, Kurt King, who survived five former champions and two wildcards in an epic Rumble Somewhere Near Des Moines, will put his title on the line.

Spencer Morgan continues to seek revenge for his fallen comrade and fashion connoisseur, Raoul Hernandez, as the Men’s Warehouse night manager takes on Aladdin Bell, the partner of the man that broke Raoul’s arm, America Wright.

The high impact and extremely French DUBOIS earned the Dot TV title last week, and as is mandated by Superchat Pro’s arcane bylaws, he will defend that belt against the ever-punctual Eosinophil Rossi.

The Gruesome division is known for horrifying spinal injuries, and two men will risk paralysis as Gary Bollea and Foundation Russo battle it out inside the chain-linked dodecahedron for number one contender status to the title currently held by the dick kicking Wigwamm Watanabe.

Let Liu and Xylophonist Bianchi, known as The Fixers, are capable, at best, of combining forces to defeat a single opponent, poorly cleaning the ring of blood stains, and mostly playing grab-ass in dank crawlspaces inside the Beliribbun Civic Arena and Agricultural Exhibition Hall. However, they defeated Philly Davis, which has shoved them into tag title contention. They will take on a pair of violent, dangerous men, Blowhole Bernard and Justice Turner for a championship opportunity. Good luck, boys.

The Sons of Anger had an incredible match for the Trios titles against Supreme Buick, falling just short in capturing gold. Since then, a series of singles and tag matches have ended the same way as that title bout, with another crushing Sons of Anger defeat. Now, SoA’s spiritual compass, Rastaban Baptiste, known primarily for interfering on his team’s behalf, will team with longtime boxing standout Gorvis Rogers, as they take on the intellectually bankrupt due of Sanders Suzuki and CHEESEST. Another loss for the Sons of Anger will surely send them in a funk that no slap bass solo can pull them from spiraling down, down.

The LOST Boys, Until Robert and Both Ferrari, current Hardcore Tag champions and Naveen Andrews superfans (some would say stalkers), have been embroiled in a bloody, violent feud with High Seas, the team of Johnny Depp enthusiast, Captain White and Algorithm Schneider. An exploding ring match left all four men knocked unconscious. Now, Schneider takes on Robert, while White faces Ferrari in a pair of Light Tube Deathmatches, as the two pairs prepare themselves for another championship clash next week.

The Dot TV title, which is defended every single time Superchat Pro airs, sometimes seems to pull challengers at random. Tonight, four men will face each other in a Fatal Fourway for the number one contendership. Former champs, Nightsbane KVLT and Offers Thompson will face off against Bradford Culpepper and Kelly Kelley, the latter two men involved in a brutal and extremely one-sided feud that Kelley doesn’t seem to be aware of, due to an inordinate amount of brain trauma he’s suffered at the hands of Culpepper. The first fall to a finish, so the action in this bout is guaranteed to be very high paced.

Former Hardcore champions, Zoning Zhang and Technology Cooper had what looked like an intense feud over the belt simmering, as they had suffered a pair of double knockout draws in back to back Exploding Ring Deathmatches. However, notorious murderer, Alex Thompson, fresh out of solitary confinement and back on the bizarre work release program he has with Superchat Pro, took on then-champ Cooper in a Cage Match and won the belt in devastating fashion, as only a behemoth like Alex Thompson can. Now, Cooper and Zhang look to have their rubber match, while also determining who’s next to challenge the monstrous Thompson.

In the night’s main event, the Belly Ribbon Fight Camp, in the form of Bianchi family patriarch, Sledding, his son Boxing, and Computer Collins, plus the unaffiliated potential ally, The Masked Cyclist, take on the vile Alt-Right Connection. World champion Ichabod Adams, tag champs Federal Bell and Piotr Petrov, plus the steroid-enhanced, yet politically distanced, Gene Greene. These eight men will battle, elimination style, in a Series of falls that will continue until one team is out of Survivors.