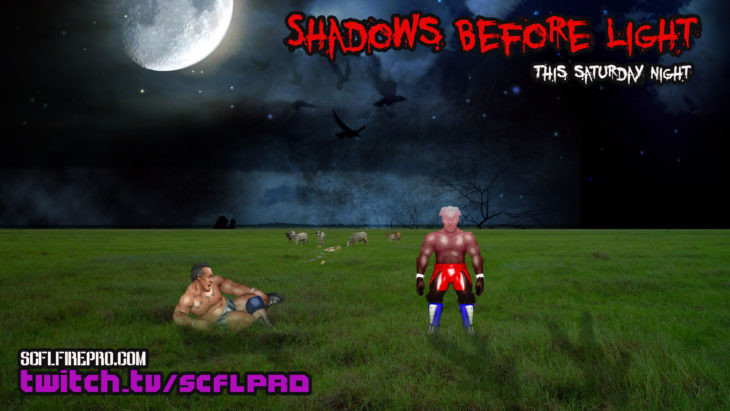 To say that the entirety of SCFL Pro fans, fighters and affiliated goons are still in a haze after last week’s show would be an understatement. The transcendence of Miles Manhoef, followed by his sixty-minute draw against Discussion Davis will undoubtedly go down in history as one of the strangest one-night performances in an already strange league that is SCFL. The question is: at what cost?

SCFL Back on a Saturday Night… For one Week Only

This week we’ll find out the cost as Miles Manhoef is set to team up with Discussion Davis. This will be a rare week where Davis doesn’t hold an open challenge for the SCFL Pro World Championship, instead will tag with Miles Manhoef against Ichabod Adams and Federal Bell. The Alt-Right have been a continual threat to Davis’s championship run, with Miles always waiting in the wings to ensure that they didn’t succeed. The question, of course, is can Miles and Discussion work together after that grueling match last week, or will they fall apart like many SCFL Pro hodgepodge tag teams have before them.

Giovanni Dinner’s newly-won SCFL Pro US Championship is still without a clear contender, but Spencer Morgan and Ricky Robinson are looking to change that in one of the feature bouts of the evening. Because of Morgan’s absence to take care of business at the Men’s Wearhouse locations that need him, we haven’t seen much of him since losing the title to Raoul Hernandez (who, in turn, lost to Giovanni), but his return to the limelight tonight means his warpath of revenge will begin. Robinson has been a constant thorn in his side, sexually harassing him inside of the ring while Raoul watched. Yet, the few wins that Ricky holds over Spencer place him in the line of succession for the US title, making this a compelling contendership bout.

Of Course There Are Titles

Blaster Robinson will finally challenge Boxing Bianchi for the SCFL Pro Shoot Championship after winning a professional kickboxing bout over the confused Bianchi a few weeks back with only one arm at his disposal. Boxing Bianchi is not a proud man, but losing to a man with an injured arm — who’s very strength is punching — has to be a blow to whatever nestled ego he does possess. On Saturday night the confused, tattooed Bianchi will have his chance at redemption and to prove himself the most worthy man to hold the holster in the league.

In singles action we’ll see the former SCFL Pro Dot TV Championship holder in Wim Nijman look to regain his footing in a world outside of fifteen-minute time limits against the very, very tough Computer Collins. Both men are two of the very best in the world and a win for either man could mean bigger and better things in the future.

So join us at 11:00pm eastern time on Saturday night, July 13th for SCFL Pro, live via Twitch! http://twitch.tv/scflpro.