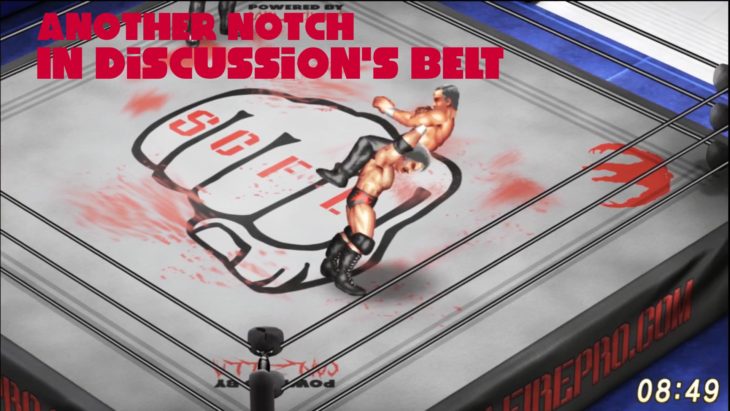 When all is said and done, what the June 2nd show will forever be remembered for was Raoul Hernandez losing his mind. That isn’t to say that a lot didn’t happen, because a lot did happen at the BBQ Bash Fallout event, but Raoul Hernandez is the name that is on the tip of everyone’s tongues yet again. When Puncho Baggins and Ricky Robinson met Spencer Morgan in a tag team bout the big question on everyone’s mind was who would Spencer team with? Raoul was the only friend that we knew of and now he’s got his pals from the Sons of Anger with him, making Spencer’s life a living hell. Perhaps it was the SCFL Pro Hardcore Championship #1 contender’s role in this match that stirred him from his seat at the Food Place, or maybe it was the camaraderie of eating alone while Bradford Culpepper looks on disapprovingly, but Technology Cooper competed in what could be his only non-hardcore match to date by teaming with Spencer.

Tapas Tiempo was ringside, perhaps on a scouting mission to see how the other Sons of Anger members could stack up for his new, breakaway group, but Raoul was nowhere to be found. That, of course, changed when he stormed the ring mid-match and began beating on Spencer. Spencer fought valiantly, but eventually Ricky Robinson’s overly-sexual attacks and Raoul’s interference led to Spencer tapping to a heel hold. Without his SCFL Pro US Championship bout secured, Raoul made his presence felt by running out and assaulting Magomed Ashmonov in his bout with Philly Supreme, then attacked Freddy Fischer in his SCFL Pro Dot TV Championship match with Wim Nijman.

Finally, his voice must’ve been heard, because that was all that we saw of him for the night, and we’ve been told that next week he can expect a shot at Spencer Morgan, but at what cost?

Wim Nijman did make SCFL Dot TV Championship history, though, as he defeated Freddy Fischer by knocking him out with a brutal backdrop suplex. Philly Supreme was able to defeat Magomed Ashmonov in an incredible bout that saw Magomed hit so many uranage slams on Supreme that Philly began throwing out big suplexes of his own, eschewing his powerbomb and uppercut-based offense before going back to the uppercut to secure the victory.

The SCFL Pro Trios Championship were on the line as Tapas Tiempo and his opposition of the Sons of Anger led to this moment, where he was completely and utterly let down by his newly-assembled dream team of Gordon Kuntz and Kurt King. Neither man was interested in helping Tapas after Ratt hit a big german suplex on him — right by their corner — then pinned him for the three. Speaking of letdowns, Discussion Davis ended up fighting Sledding Bianchi in the main event as a part of the Open Challenge, only to hit the Champion’s Fall on Sledding just shy of 9 minutes and knocked him out cold.