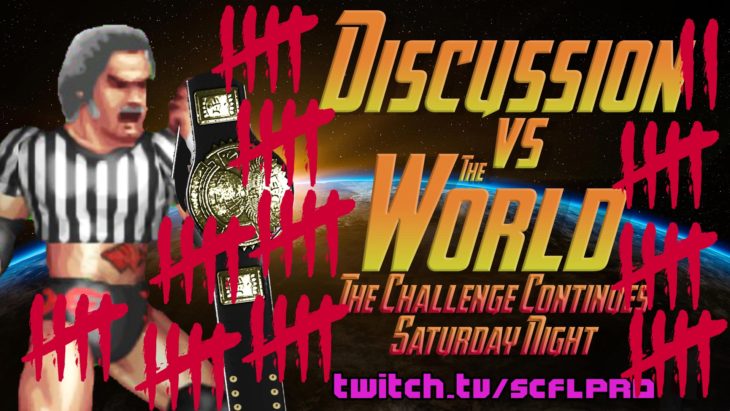 Greetings, wrestling fans! Last week, things took an ugly turn when Uncle Sledding’s Backyard BBQ Bash turned into a Backyard BBQ Brawl, when Ichabod Adams showed up and demanded his number one contender contract be honored, forcing a World Title match against Discussion Davis right then and there. Miles Manhoef made a surprise return to thwart Ichabod, kicking off the most bizarre Discussion Davis World Title Open Challenge in SCFL history as nearly every sober and healthy man on the roster went in the ring to vie for the belt. Davis personally eliminated nine other men, putting his title defense mark at an incredible 11 times retained.

This week, live at twitch.tv/scflpro things are scheduled to be pretty fantastic, so let’s take a look at what’s on the card.

Next up, we have a MMA match as Fat Jonesy takes on Wigwamm Watanabe, who is trying to secure his place as a shoot fighting standout. After that, it’s the return of the bash brothers, Blowhole Bernard and Justice Turner, as they take on two decidedly non-brothers in Hans Schmidt and October Schmidt. Let’s just hope everyone keeps their arms and bodies on the plane of existence they belong in this one.

After that, Weather Walker continues his crusade against the spaghetti slurping Giovanni Dinner. Walker has been on the verge of beating Giovanni multiple times, but Mama Dinner is always quick to distract a referee and give her “sweet bambino” some extra time to recover.

In Hardcore Tag team action, Gary Bollea and Turgid Delmonico are taking on the uncle and nephew tandem of Brick Roberts and Eosinophil Rossi, with the winners getting a Hardcore Tag title shot. This match should be violent and bloody.

Up next, the powerful legs of Karate Hendrix faces off against the dangerous leg locks of Credit Lewis. Expect the winner of this one to require some assistance getting to the locker rooms when this match is all said and done.

Aladdin Bell still wants to give his father, Federal Bell, a piece of his mind, but he’ll have to go through Federal’s tag partner, Piotr Petrov first as the DSA and the Alt-Right continue to clash.

Raoul Hernandez has challenged Spencer Morgan to a tag team match, and it remains to be seen who among Raoul’s two pals, Puncho Baggins and Ricky Robinson, that Raoul will decide to team with. Spencer, on the other hand, is a bit of a loner, and Raoul was pretty much his only ally. He’ll have to make friends fast if he wants a chance to win this match.

Magomed Ashmonov, who put in a great showing against Discussion Davis two weeks ago, has caught someone’s attention, as he’s got a high profile match against Philly Supreme. Supreme might be a little distracted, what with his little brother Cheesesteak Supreme’s best friend, Sanders Suzuki, getting absorbed into the Shadow Realm last week. Hopefully he can focus on the dangerous Ashmonov, who will be looking to use his array of sambo throws and deadly axe kicks to take out Philly.

The night is wrapping up with a triple main event of title matches. First up, Wim Nijman puts his Dot TV title on the line against Freddy Fischer, in another epic clash of great Dot TV champions. Wim’s encounter with Offers Thompson ended in Shadow Realm-induced tragedy, so let’s hope there isn’t a repeat performance against Fischer.

Next up, in the co-main event spot, is a long-awaited Trios Title clash between the champs, the Sons of Anger, Rastaban Baptiste, Gorvis Rogers, and Ratt Middle taking on the disgruntled former Sons of Anger member, Tapas Tiempo, Gordon Kuntz, and Kurt King. That should be an intense battle.

In the main event, Discussion Davis, fresh off a hellacious battle during a backyard barbecue, is once again issuing an open challenge for his World Title. Xylophonist Bianchi has advocated for his dear uncle Sledding Bianchi to be given the title match, but it remains to be seen if that’s who will answer the challenge.

Tune in to twitch.tv/scflpro for all the best action in SCFL this Saturday night!