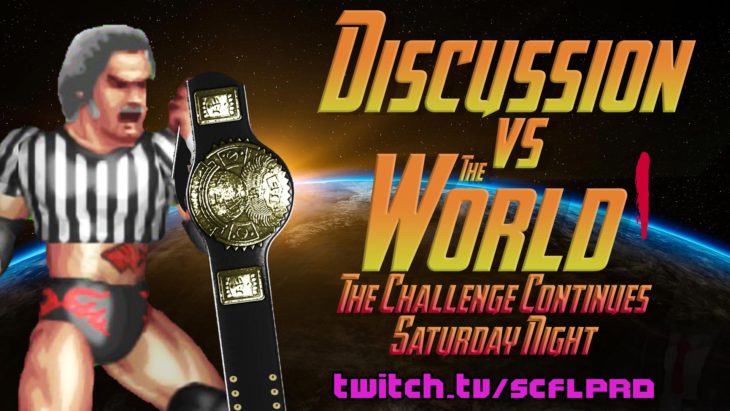 Hello SCFL Pro fans! We’ve got a fantastic night of fights coming up this Saturday, exclusively at twitch.tv/scflpro starting at 11PM ET.

Our new Scramble champ, Especially Esposito will look to defend that frying pan in a classic Battle Royal against seven other very hungry competitors. After that, we have one-half of the Hardcore Tag Team champions, Mickey Kelley, taking on newly-minted death match aficionado, Puncho Baggins, in hardcore singles action.

Next up, we have October and Hans Schmidt taking on the uncle and nephew tandem of Brick Roberts and Eosinophil Rossi in a standard tag match. Following that, Ron Lewis enters the caged dodecagon to face off with Baby Hayes in MMA action. Hayes disturbed a lot of people by going completely nude in Hardcore Tag action last week. Let’s hope he can locate his diaper for this bout.

Fragrant Tanaka and Garden Greene have soy-based imitation beef going back a few weeks, from when the Violent Vegan pulled a knife during Trios action between Greene’s Belly Ribbon squad and Tanaka’s PK Gym. Now, these two will settle the grudge, one on one, in a Knife Deathmatch.

Speaking of grudges, Tapas Tiempo’s rage at the Sons of Anger continues to burn brightly. However, like last week, he will be sending a proxy in his stead, as he’s lured another member of that puka shell-clad gang to his side. Earl Vontrell will be taking on one of Sons of Anger’s pound-for-pound hardest hitters in Meete Mein.

There’s more grudge action this week, as Giovanni Dinner matches up with yet another member of Belly Ribbon Fight Camp, as he takes on Immediately Ito. Word on the street is that Weather Walker, who was robbed of wins two weeks in a row by Mamma Dinner, will be in Ito’s corner to help balance things out.

The Missouris haven’t been seen in Hardcore Tag action in a few weeks, and they were itching to have glass embedded in their skin, so they are challenging Gordon Garabaldi and Front Reed to a death match. Garabaldi and Reed have shown some recent success in Hardcore matches, both winning via submission, but I don’t know if the Missouris are capable of giving up.

Also: Spencer Morgan is going to apologize to Raoul Hernandez after ditching out on him for multiple weeks due to late shifts at Men’s Wearhouse.

The final stretch of this week’s show is all title matches. First up is the Dot TV title, as Wim Nijman defends against Nightsbane KVLT, a former champion with four defenses to his record, all coming by way of draw. Nijman, of course, has three successful defenses, with two ending via pinfall. Even a draw against KVLT will push Nijman to the upper echelons of top Dot TV champions of all time.

The co-main event is a Big Ass Tag Team Title fight. Computer Collins and Foundation Russo will take on the surging LOST Boyz. Russo concussed Until Robert a few weeks back, so revenge has got to be on Robert and Both Ferrari’s minds.

The main event is Discussion Davis’ World Title Championship Open Challenge. Last week, Davis took on an extremely sleepy Dougie Middle, who simply rolled out from under the ring, and got decimated in under two minutes. Hopefully, a more credible threat emerges.