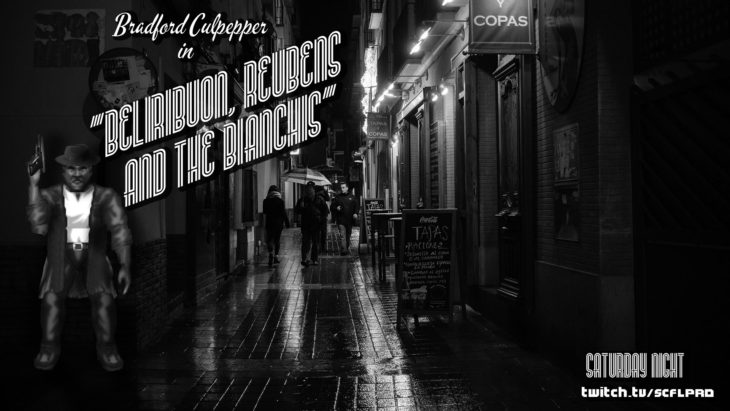 Oh my goodness. I don’t know what else to say about last week’s Superchat Pro event, Clotheslines for Clothes. The matches kept finding ways to top themselves, and that’s before we even consider the fact that SCFL head honcho, Bike Bianchi, got arrested midway through the show, only to triumphantly return.

I don’t want to get too ahead of myself, so let’s just take a look at what’s going down this week, Saturday night at 11:30PM ET, only on twitch.tv/scflpro.

The night kicks off with the Opener Scramble match, and in a shocker, Ron Lewis retained the frying pan after a brutal contest that saw three men knocked unconscious. Can Lewis hold onto the skillet for another week, or will one of his seven opponents survive the Battle Royal and take it for themselves?

Wim Nijman defended his Dot TV title last week, becoming the first champion to actually pin an opponent. Sure, the title has changed hands via pinfall before, but other than Freddy Fischer’s submission and a few cage escapes, every other champ has retained at the end of fifteen minutes, due to time limit draw. Wim is already making a strong case for himself as a great Dot TV champion, and he’ll have to put that claim to the test this week, as he takes on Garden Greene.

Front Reed is finally back in action again, having most of his blood put back into his body. He’s once again entering the world of Hardcore action, as he takes on Fragrant Tanaka. Speaking of recoveries, Lil Jonesy is on the mend, and he’s facing October Schmidt in an MMA bout.

The night rolls on with trios action, as the Alt-Right, comprised of Gene Greene, Piotr Petrov, and Federal Bell, face off against a red tide of socialists, as America Wright and Aladdin Bell of the DSA team up with Sweden’s own, Torvald Harrallssen. We will then turn our attention back to the caged polygon, as Ricky Robinson and Nightsbane KVLT clash in another MMA contest.

Revenge is the name of the game as Both Ferrari takes on Gyro Supreme. Ferrari is still mad that the LOST Boyz were swindled out of a Tag Title shot when Gyro and Foundation Russo decided they loved beating each other up, and took out Both’s partner, Until Robert. Ferrari then destroyed Gyro’s hapless nephew, Cheesesteak Supreme, last week at Clotheslines for Clothes. Now Ferrari and Gyro will clash in what should be a brutal affair.

The brutality doesn’t end there, as Captain White faces off with the supremely French Charles DuBois in Hardcore action. White’s teammate, Algorithm Schneider was unsuccessful in taking Technology Cooper’s Hardcore title last week, but maybe White can fight his way to a title shot of his own.

Spencer Morgan might have finally ended the idea that he’s a perpetual underdog last week in his U.S. Title defense against Freddy Fischer, and now he’s back with his dapper compatriot, Raoul Hernandez, as Team SUITS take on the newly formed tandem of Tapas Tiempo and Gordon Kuntz. It seems that Tiempo has swayed Kuntz to leave the Sons of Anger and join the Spaniard in his quest of completely dismantling the Sons of Anger.

Giovanni Dinner didn’t get much time during the telethon portion of last week’s event, as his allotted time was quickly ignored when Bradford Culpepper revealed himself to be an undercover cop and arrested Bike Bianchi. Dinner is back in the ring this week to take on one of Belly Ribbon’s heaviest hitters, Weather Walker in singles competition.

It wouldn’t be a SCFL show without a classic Bianchi Blunder, and last week was no exception. Zorastriani Brown had earned a Shoot Title fight the week prior with a win over Credit Lewis. However, he was accidentally sent out to face Wim Nijman for the Dot TV title. Now it looks like the paperwork has been cleared up, and Shoot champion, Boxing Bianchi, will defend his title against Brown inside the cage.

That isn’t the only cage match, as Discussion Davis has once again complained his way to a World title match. Citing referee bias and a bizarre situation involving The Masked Cyclist and adrenaline dumping, Davis has managed to request and be granted a World Title cage match against Bike Bianchi. There is no referee involved, as only escaping the cage will confer victory.