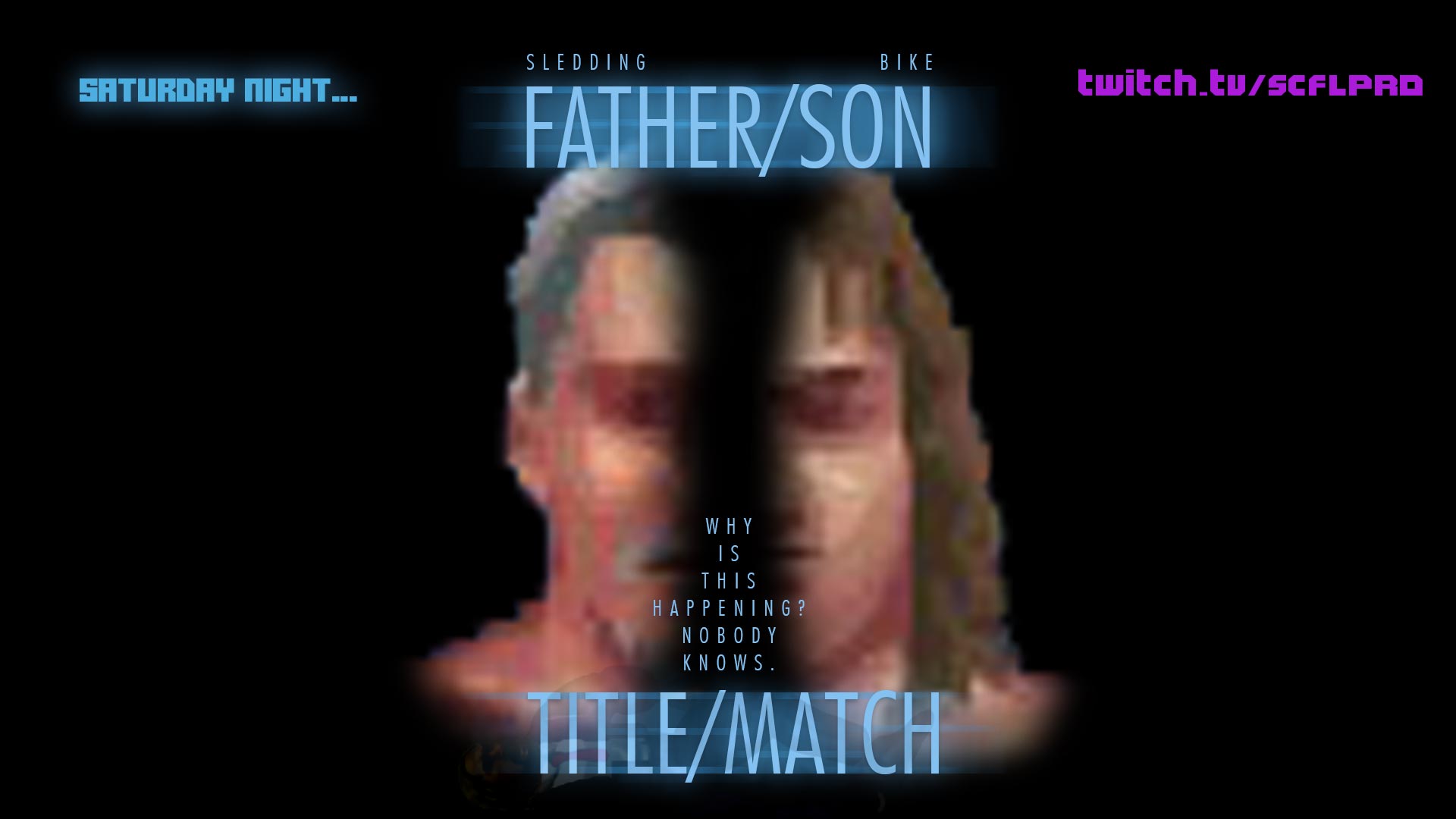 Greetings friends. Superchat Pro prides itself on bringing great wrestling action, week after week, and the upcoming offering is no exception. On Saturday, April 7 at 10:30 PM PST, head on over to twitch.tv/scflpro to catch some of the best wrestling action that the Beliribbun Civic Auditorium and Wicker Furniture Emporium has to offer.

As always, the night of Big Ass Fighting (TM) will begin with a defense of the Scramble Title. Vector Vang puts his teflon skillet on the line against seven other men in a Battle Royal, where combatants can be eliminated via pinfall, submission, knockout, and by getting thrown out of the ring.

Eosinophil Rossi, the greatest Scramble champ in Superchat Pro history has decided to move on from the opening match, and will take on Front Reed in a Hardcore bout. Reed, who lost his nipples in a devastating warehouse accident, certainly exists as a human being.

Ichabod Adams has turned his ire from the Bianchi family and his own brother-in-law, Ron Harris, and has now focused on rising superstar, Miles Manhoef. Adams will take on Manhoef’s tag partner and mentor, Jacques Jean-Jacques. Meanwhile, Miles will face off against Ichabod’s fellow Alt-Right partner, Federal Bell in singles action later in the evening.

In Trios action, Blaster Robinson, Fragrant Tanaka and Karate Hendrix will take on an iteration of the Belly Ribbon Fight Camp, consisting of Immediately Ito, Especially Esposito and Garden Greene. There’s a strong chance that the victorious team will be in contention for a shot at the Trios champions, the Sons of Anger.

Speaking of champions, Offers Thompson will make another defense of his second reign as Dot TV champion against the deadly and hard-hitting Choochai TrainMTGym. If anyone’s capable of defeating Offers under the 15-minute time limit, it is Choochai, who has put more than his fair share of kickboxers out of commission with his devastating Muay Thai.

Foundation Russo, another extremely hard hitter, will be taking on Sanders Suzuki in an MMA-style bout as the feud between Belly Ribbon and the Supreme Family continues to percolate. Suzuki might be at a distinct disadvantage here, as he’s foregone most of his older kickboxing techniques in favor of offense more oriented around top rope attacks. Unfortunately, there are no ropes, top or otherwise, inside the Caged Dodecagon of Superchat Pro’s Gruesome Fighting.

Tapas Tiempo continues to target members of the sprawling Sons of Anger group. This time, he will do battle with Turgid Delmonico. Will Delmonico’s SAFTA training help him against Tiempo’s brutal lariats, or will Tapas snatch the puka shell necklace of another former ally?

The Tag titles are on the line next, as the champions, Philly and Gyro Supreme, look to defend against the DSA, America Wright and Aladdin Bell. The Supremes will have to focus entirely on their opponents, as Wright and Bell are crafty submission specialists.

The main event is, simply put, a ridiculous travesty. World champ, owner, president and commissioner of Superchat Pro, Bichael Bianchi, has decided to award a title shot to his very own father, Sledding Bianchi. Sledding is getting this amazing opportunity simply for refereeing the entirety of the March Sadness tournament. While it was an impressive feat for an older man to referee 31 consecutive matches, that isn’t deserving of a World title match. This will mark the second straight time that Bichael has made a title defense against a clearly overmatched opponent, the last time being a battered, beaten, concussed and blood-deprived Kelly Kelley.

Please join Superchat Pro for a fantastic evening of wrestling, exclusively at twitch.tv/scflpro