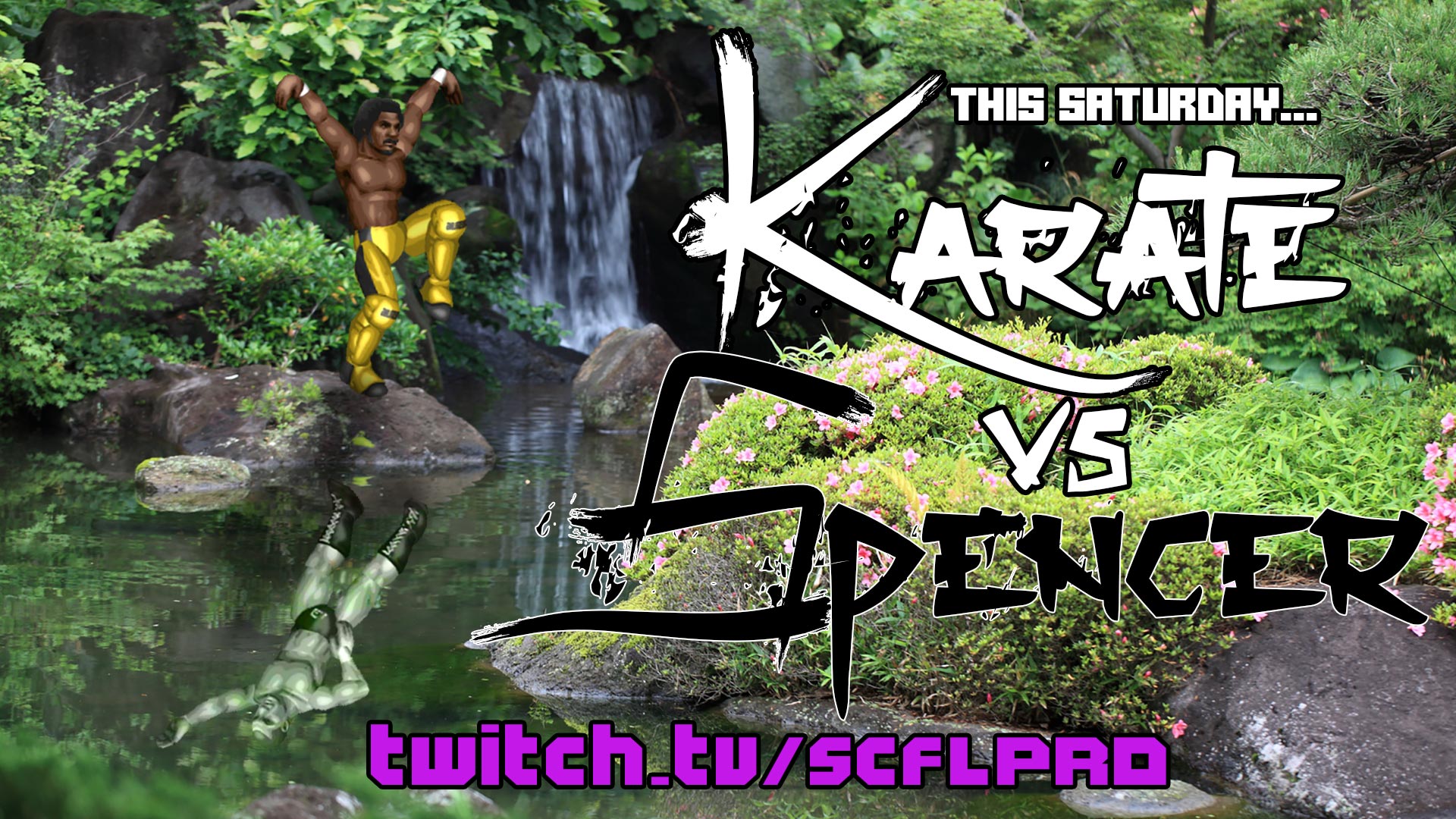 Hello and welcome, Superchat Pro fans! The greatest pro wrestling promotion out of Beliribbun, Iowa, is back for another weekend of hard-hitting action. Tune in to twitch.tv/scflpro on Saturday night for a fantastic night of Big Ass Fighting(TM).

The next bout is a bizarre contest, as former World champion, Ichabod Adams, takes on his brother-in-law, Ron Harris. Word is that the situation in Ron’s home, where Ichabod lives in the basement, has been bubbling up to an unbearable point for the mild-mannered Harris.

Tapas Tiempo has been incredibly impressive since his run in the March Sadness tournament. However, his brutal beatdown of his tag partner, Fortran COBOL in the second round, has effectively ended that team and forced Tiempo out of the Sons of Anger. Now, Tiempo is taking on another Son of Anger, Earl Vontrell. Can the former backyard and boatyard brawler defeat the supremely shiny Tiempo, or will the Sons lose another man to Tapas’ devastating lariats and elbows?

Speaking of tag teams, two pairs of guys that still get along will be vying for tag title contendership as the DSA, America Wright and Aladdin Bell, take on Immediately Ito and Especially Esposito, otherwise known as Adverbs International. Ito and Esposito have had one crack at the tag titles, during the Alt-Right’s reign, but they’ve made great strides to climb their way back to the top. The DSA, meanwhile, has been impressive since they started teaming, including sending opponents to the back with injuries.

Next up, we have Chuckie Murphy facing off against Giovanni Dinner. If Bichael Bianchi had any type of sense, Mama Dinner would be barred from ringside, but we all know that Bichael is extremely ineffective. There’s a solid chance that the winner of this bout moves higher up the World title rankings.

The Dot TV title is on the line next, as newly crowned and two-time champ, Offers Thompson faces off against the Scramble kingpin, Eosinophil Rossi. Rossi is a former Dot TV champ in his own right, but he never successfully defended the title, not even with a time limit draw.

Someone call Daniel Day-Lewis and Paul Dano, because There Will Be Blood as Maximo Missouri takes on Maniac Missouri in an Exploding Barb Wire deathmatch. The winner will be the new Hardcore title number one contender, and I’m sure the Missouri brothers will gladly pummel each other into bloody heaps, then go right back to being one of the most violent and devastating tag teams in all of Superchat Pro.

As the ring gets cleared of blood and guts after that last match, we turn to the opposite end of the Beliribbun Civic Auditorium and Home for Transient Dogs, where the Shoot title is getting defended inside the Caged Dodecagon. Gary Bollea takes on Boxing Bianchi, and hopefully, both men have been listening to Wu-Tang, since the key to any Shoot fight is to Protect Ya Neck.

Next up is an epic grudge match, as tag team champs, Gyro and Philly Supreme, along with Sanders Suzuki, take on the most dangerous men in the Belly Ribbon fight camp, Computer Collins, Weather Walker, and Foundation Russo. The amount of hatred and history these men have towards each other would take thousands of words to describe, so let’s just say that nobody likes anyone across the ring.

Everyone get out their “Knees!” counter, as Miles Manhoef takes on Raoul Hernandez. Miles impressed everyone with his run in March Sadness, though if he keeps up his unsafe knee drop attacks, he won’t be able to run anymore. Raoul had a decent showing in the tournament, but with his normal tag partner occupied, he’s dipping back into singles action.

In the co-main event, the Trios Titles, which have been tied up in a heavily contested arbitration process, are finally going to be decided. The Sons of Anger, Ratt Middle, Gorvis Rogers, and Rastaban Baptiste, will be taking on The Fixers, Let Liu, and Ratt’s younger brother, Dougie Middle, plus Sledding Bianchi, who is taking the place of the injured Xylophonist Bianchi. Several weeks ago, the Sons of Anger attempted to defend the Trios titles against The Fixers, but Sledding Bianchi joined his nephew Xylophonist, and he ultimately was the deciding factor, scoring a submission victory over Ratt Middle. However, seeing as that was a four-man team, the result was called into question. Now, the Trios titles will be decided as two teams consisting of just three men each, will face off. Are three Fixers really the equilvalent of three men?

Speaking of Raoul’s tag partner, the main event will feature that man, the always dapper and debonair Spencer Morgan, Morgan is making the first-ever defense of the U.S. title as he takes on March Sadness winner, Karate Hendrix. Hendrix kicked a lot of people in the back of the head to earn a shot at the ceramic coffee mug, while Spencer’s been on a lot of late shifts, closing his local Men’s Warehouse most nights.

This whole Superchat Pro card is going to be extremely outstanding, so please tune in to twitch.tv/scflpro for the very best in professional wrestling.